Rolling With the Panchos

How many uses could I think of for this object that I am now carrying to the trash?

Here at NPH-Honduras, Pancho * wins the award for the most creative uses for a single, discarded roller skate.  He has converted it into:

Pancho shows us that one person’s trash is another’s treasure.  He also reminds us that when our eyes see few possibilities, God’s plan for us may be quite the surprise. 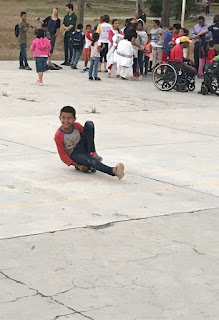 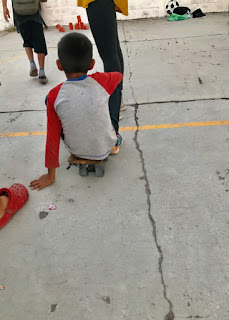 at February 27, 2019 No comments:
Email ThisBlogThis!Share to TwitterShare to FacebookShare to Pinterest

The quiet wonder in Javier’s * gaze revealed that he was looking at something he had never seen before. 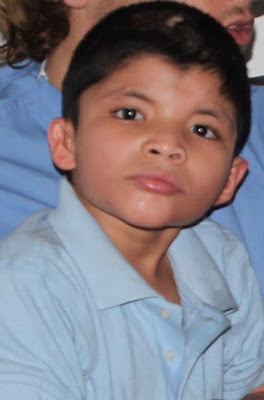 Across his face – held close to the back window of the bus – coursed the shadows of telephone poles and billboards.  Cars, buses and taxis were magnets to his eyes as they passed.  Silent, but curious, Javier obviously found newness and pleasure in those things that many of us have learned to ignore. 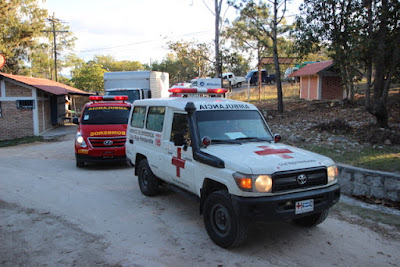 The eleven-year-old was journeying from the place that had housed him for two years in San Pedro Sula, Honduras to his new home at Nuestros Pequeños Hermanos (NPH).  The youngest of seventeen boys with disabilities, Javier and his peers were soon to join the NPH community. 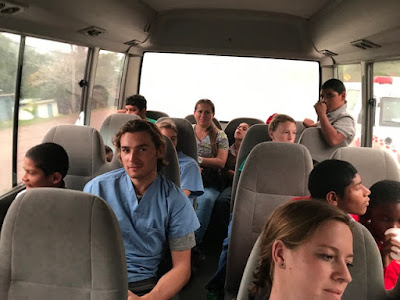 The morning had seen a juxtaposition of well-laid plans with operational chaos, of Yankee ingenuity with Honduran practicality, of laughter with tears.  Eventually, our caravan of bus, truck (loaded with mattresses and cribs) and four ambulances would wind its way along mountainous terrain to its destination at El Rancho Santa Fe.  The new arrivals – young men from ages 11 to 22 – would quickly be fed, given new clothing, evaluated by medical personnel and situated for the night.

Welcoming smiles and strings of colorful decorations lined the newcomers’ paths into their new home.  Javier caught sight of his name – scribbled in magic marker – on a yellow balloon.  For this new member of the family, his eyes beheld more than just a bright and attractive object.

They witnessed what respect for the human dignity that dwells in each of us can look like. 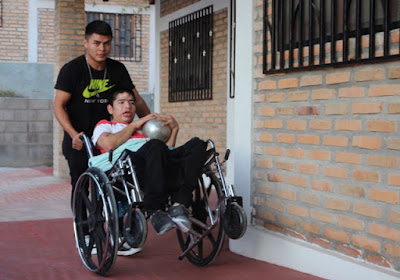 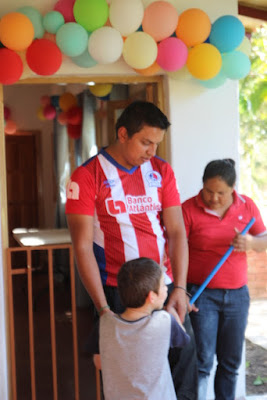 **  The Stavinohas have returned to NPH Honduras, and continue their connection to Mission Doctors Association.  They will remain through the Spring of 2019.
at January 31, 2019 No comments:
Email ThisBlogThis!Share to TwitterShare to FacebookShare to Pinterest

Today, Susan studied at the apron of the Master.
After we finished early in the NPH clinic, she decided to offer assistance at the tortilla hut.    Like most others – a building of brick and tile, located near the center of the Ranch – the tortilla hut stands out only by its adjacent, open-air, wood-fired, smoke-belching black cauldron……   and by its delicious and enticing fragrance.
Doña Gloria directs the daily orchestration of stoking the fire, boiling the thick, yellow maize, adding the lye, and stirring with her squat wooden baton until the kernels are softened to her exacting standard.
The second movement brings large amounts of the boiled concoction through a funnel/grinder apparatus, to produce the malleable, doughy masa, which finds itself formed into uniform, flat discs by the hand-cranked “tortillero”.
At the large, black stovetop, Doña Gloria performs her grand finale of cooking the tortillas to a spottily-browned, slightly crisp perfection.  Her spatula effortlessly flips and rearranges the notes on her page, while towers of finished product rise to her right.  Her accompanist shuttles the aromatic, freshly-made tortillas to a large, draped washbasin, used to transport the precious contents to the insulated termos, and then on to the hogars for lunch.  Spectators are graced with samples that – with a pinch of salt in the smoky tortilla air – complete the experience of ecstasy.
While the floor of her chamber is swept, and the instruments are cleaned for another day’s performance, Doña Gloria sits and wipes her damp brow.  With the face of someone much younger than her 69 years, her smile reveals a sense of satisfaction and accomplishment.  A stout and solid woman, her dimensions trend toward those of her perfectly-round works of art.  Hands grown strong and tough through years of hard work smooth back feathery gray hair beneath a well-worn baseball cap.  Work is finished until starting up again before tomorrow’s dawn.
Doña Gloria makes 2,000 tortillas daily for all those who live and work at Nuestros Pequeños Hermanos.  Conservatively estimating that one half million tortillas kiss her griddle every year, in her 50-year career, Doña Gloria would have produced enough tortillas that if placed end-to-end, would form a ribbon of corn around the circumference of Dallas, Texas…….  68 times.
If tomorrow morning, one is fortunate enough to be cutting across the Ranch, he should be prepared to experience a whiff of the work of a virtuoso. 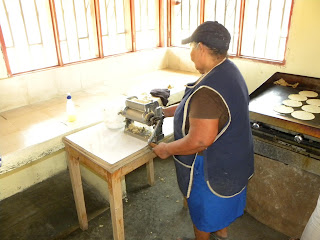 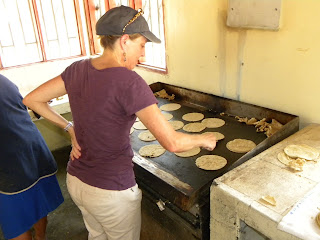 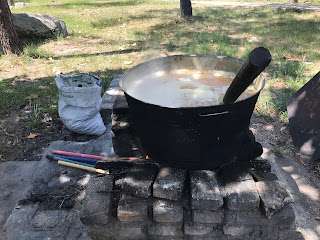 *The Stavinohas have now temporarily returned to the US.  Appearing in Neighbors Far Away will be essays from their previous visits to NPH Honduras.

at July 30, 2018 No comments:
Email ThisBlogThis!Share to TwitterShare to FacebookShare to Pinterest

Preach the Gospel at all times.  Use words if necessary.

This saying – attributed to the spirit imparted by St. Francis of Assisi – is but one of many ways to express that our actions speak louder than our words.

A daily reminder of this truth is painted on the side of the church building which we pass on the way to the clinic at NPH Honduras.  There, a father lion gives advice to his lion cub, telling his little one to be careful about where he steps.  “Watch your own steps, then,” chides the youngster, “because they are the ones that I am following”. 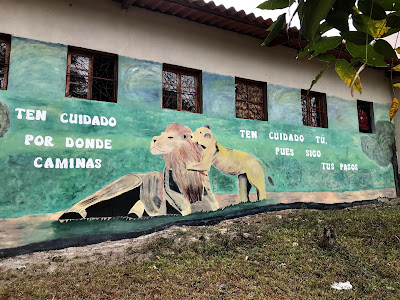 Aren’t we always challenged to practice what we preach?

Here, we have repeatedly witnessed the active embrace of human dignity expressed in so many ways by ordinary people with extraordinary love and respect for one another.  Their example impacts us much more dramatically than does the painted reminder.

Ramon* – who is himself disabled – took special care with his newly-arrived, wheelchair-bound brother, who needed some extra attention at the water park. 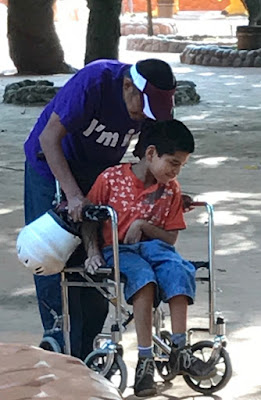 Recently, Tia Nena* came to our clinic, suffering from a distressing infection.  After receiving medication, rehydration fluid and advice that she rest, she headed back to Hogar San Francisco.  That night, however, at the dinner/rosary/movie night, who but Tia Nena was working hard to make sure that her children were clean, fed and put to bed? 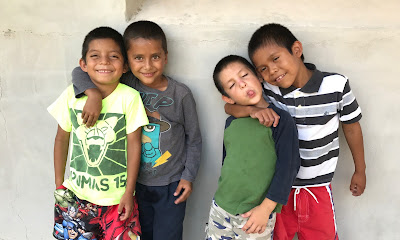 Jesus was explicit and plain in telling Peter how to follow Him (Jn 21):

The Feeding and the Tending are more important than the Philosophy and the Terminology.  How often do we – while distracted by our attempts to find the right words – walk past the lambs and the sheep on our very own trail?

May we all quietly put our feet on the path illuminated by our Lord, walk the walk, and put our trust in the Holy Spirit to guide us along.

Our patient was suffering.

Beatrice*, a 45 year-old woman with metastatic cancer lie in bed in her simple home in La Venta, Honduras.  Though chemotherapy had smoothed her head, several tiny new hairs had pushed their way out for a look at the world.  Beatrice’s face revealed a consuming discomfort caused by her tumor.  Even small movements resulted in penetrating pain.  She often worked hard to breathe.

In addition to our routine of working in the clinics at NPH Honduras, occasionally we have been asked to aid persons in the community.  Beatrice was such a person.  We would catch a ride, visit regularly, and attempt to relieve Beatrice’s pain and suffering.

As with much of our work in this country, limited resources dictate the appearance of the medical care we can give.  It is always challenging to care for a patient’s physical ailments, and at the same time maintain respect for his autonomy and dignity.  How often we are redirected to the essential premises and basic promises of our medical profession.

While we would sit at Beatrice’s bedside, within our control was the ability to  a) make no improvement in her acute suffering,  b) relieve Beatrice’s pain and breathing difficulty, temporarily replacing it with peaceful sleep, or  c) watch as Beatrice’s breathing slowed and ceased.

The force used to push the syringe would determine the result.  Unfortunately for us, no exact recipe would guide our finger in our endeavor to help Beatrice.

Scholars and Saints have given much attention to suffering.  Redemptive Suffering has been described as a good thing.  How, though, were we to know what kind of suffering Beatrice experienced?  And most importantly, what were we to do with the syringe?

As unequipped as we felt with our box of modest medicines and supplies, we felt even more unequipped to deal with the deeper and spiritual dynamic of Beatrice’s suffering.

How would we avoid getting between Beatrice and the One who calls her?

Ultimately, we aimed our efforts at relieving the pain placed before our eyes, while allowing God’s plan – on His time schedule – to unfold in the life of Beatrice.

To say that she suffers no more is the easy and self-comforting refrain.   Perhaps, however, we should celebrate that her suffering has accompanied her through an important journey – one which may have seen important healing take place.

What a privilege our profession offers us – the invitation to be close to someone at their death, and to their intimate encounter with God. 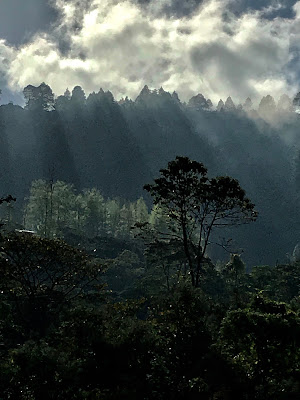 at April 30, 2018 No comments:
Email ThisBlogThis!Share to TwitterShare to FacebookShare to Pinterest
Older Posts Home
Subscribe to: Posts (Atom)

William Stavinoha, MD is a Family Physician who practiced in Austin, TX until 2016. Susan Stavinoha, PA-C is a Physician Assistant in Womens’ Health. They have three grown children and four grandchildren.

“Neighbors Far Away” is a window into the lives of William and Susan, as they periodically work with and live with the people of Honduras.

More information about the organizations with whom the Stavinohas work may be found at www.nph.org and at www.oneworldsurgery.org.